Curator of exhibitions and art projects

Andrian Judro is an artist by profession, by occupation, by vocation, a way of life, thoughts, feelings, attitude to people and reality. 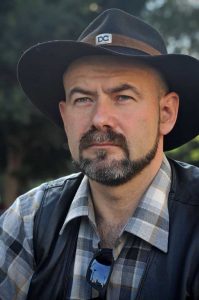 Andrian Judro studied in Minsk Art Academy and worked in his native Belarus and in Khabarovsk, Far East of Russia, participating in many exhibitions. His landscape depicts the primordial majesty of Nature, his still lives and portraits are characterized by their serious manner and the fundamental creative solutions,   attention to small details and the wholeness of the image. High professional training makes him work successfully in different genres – landscape,   portrait, still life, thematic composition.

His works are full of creative temperament, and their psychological variety range from spicy Oriental exotics to the lyrical intonations. A large variety of colors,     dynamics of a picture and compositional rhythms and accents, exciting game of geometric forms and planes create the completeness of the expressive means that is adequate to the image structure. In spite of this variety, the artist remains true to the unprejudiced perception of nature as objective reality.  He does not invent a thing or makes them beautiful, but rather lets himself be carried away by the beauty of the perfect nature and the wise world.

Creations of Andrian Judro constitute a creative, dynamic mosaic, full of harmony and optimism, reflecting the everyday human experience of each one of the images in the creation. Every detail in his works captures the spectator, helps him to observe the creation and attracts him to listen to harmonic and spiritual music of the artist’s work.

The scenes Andrian Judro chose to draw transmit spiritual simplicity and joy, and at the same time, there can be seen in his works of complex psychological compositions. His portraits emphasize various views in the characters’ personality and in their history so that the spectator can find his own view in the spiritual and inner realm and landscape. Andrian combines in his works the realistic-romantic style. His creation is a product of synthesis including reality and his phantasy, and his aim is to cause the spectator to understand the meaning of the work through Andrian’s eyes. Each work has its own lyric rhythm and its colorful and noble abundance. The thrilling play of geometric forms provides the spectator with the exotic Mediterranean and somewhat ethnic feeling. There is a combination of the old and the new in his works, decorations, and accessories of the past together with dresses of the present. The new and the old. It is important for him to remind the spectator about Jewish symbols and history. Use of color and of grey/silver tinges 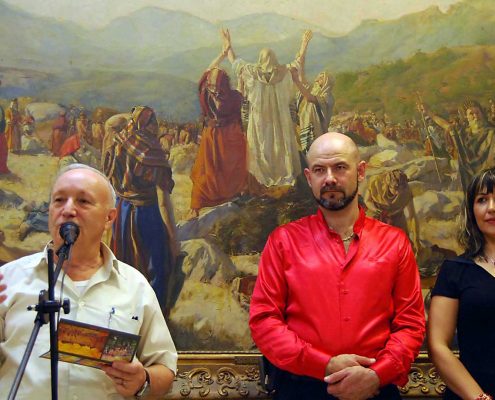 creates a feeling of interesting calming depth of another kind, and interaction with geometric forms, attention to details and to surface areas create a kind of entirety for the scene presentation. Andrian is attracted to the modern world and rejects antiquated prejudices and prohibitions of the past.

The artist’s work is well-established in multiple museums around the world and is owned by many private collectors in Europe, America, and Asia. Of all the exhibited works, the undisputed focal point was the portrait: Judro’s favorite genre, which has recently been gaining due recognition. The ‘Portrait of Bella Chagall and a Jewish Youth’ is exhibited at The National Art Museum of the Republic of Belarus, Minsk; the full-height Portrait of a Yemenite Bride is at the Museum of National History of Belarus, Minsk; the painting “The Flower of the Orient”, which portrays a young woman baking cakes, is presented at the Museum of Ethnography and Crafts, Lviv, Ukraine; a half-length Portrait of a Yemenite Bride is exhibited at the B. Voznytsky National Art Gallery in Lviv, Ukraine.

The formation of the Israeli choreography was heavily influenced by folklore. Yemenite embroidery is a frequent motive in Israel’s national garment. Insofar as the art of jewelry is concerned, following its revival by Boris Schatz, the founder of the Betzalel School, it acquired the status of a subject of study within Israel’s Academy of Arts and Design. This ethic group’s culture made a deep impression on Andrian Judro during his visit at the exhibition of Yemenite Jewish jewelry at the Museum of Israel. He travels to a Yemenite settlement located on the outskirts of Jerusalem, observes one of the most beautiful rituals in any culture: bridal preparations, and captures this magical moment on his canvases. It is quite remarkable that none of the images has been invented; rather, they exist in today’s Israel. In that sense, beside their esthetic function, Judro’s works without a doubt have major historical and ethnographic value as they present the world with pure and unspoiled beauty of tradition wrapped in a protective layer of art.  The highly detailed manner in which Andrian Judro paints his characters’ clothes and accessories helps preserve the historical aroma of the outfit; yet their wearers are our contemporaries. Their facial types and body proportions indicate that these are models bearing features characteristic of the modern day beauty 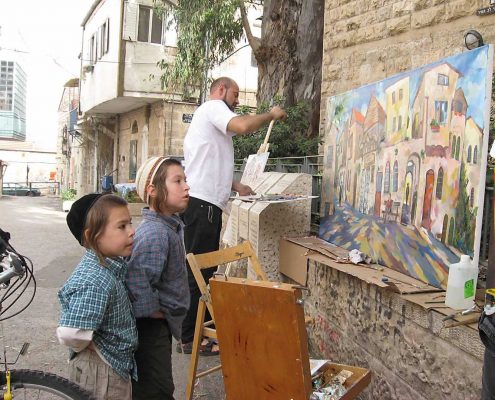 standards, which are as elusive as the fashion itself (albeit tastes do differ). Hence the openness in their eyes, which project certain slyness and playfulness captured in the position of the head; their uninhibited and gracious posture is reminiscent of the way models work the catwalk. The impressive size of the paintings underscores the representative character of the portraits where the visual space is sufficient for the expanded panoramic background as an integral part of the portrayed woman.

A sense of time… If it exists, an artistic person is “doomed” to stay ahead. Andrian Judro is an artist from the new generation, with a new sense of artistic space. In the age of the Visual Turn as painting has largely lost its craftsmanship, Andrian Judro’s art stands out in its ability to introduce a sense of modernity alongside fruit-bearing assiduity, the latter a product of the artist’s mastery of the classical style. Climbing these heights has made possible the transition to the hyper portrait, a genre, which in recent years has been generating massive interest among modern art project organizers. It is remarkable that many of Andrian Judro’s works stem from the artist’s need in reorganizing his archive of sketches as a result of his many years of working with models. He sets out to transform these sketches into staged paintings where, just like on a theater stage, anything is a prop and, first and foremost, that prop is personality. In his studio, the artist models a theater of his own in which the characters are depicted in a sense- and plot-related reciprocity with the world of objects that surround them. 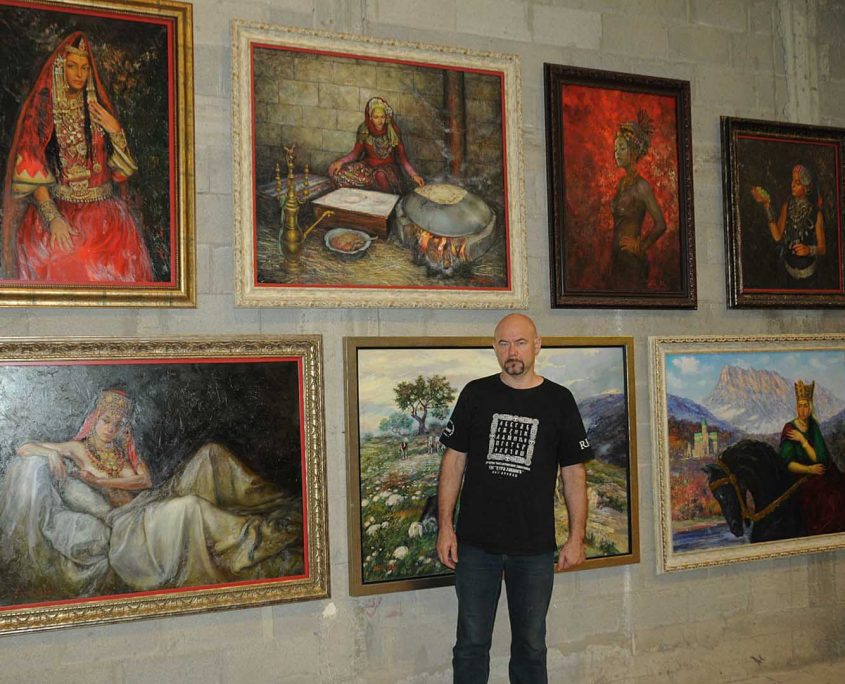