Home » THE NATIONAL MUSEUM AFTER THE NAME OF A. SHEPTYTSKY , LVIV, UKRAINA

THE NATIONAL MUSEUM AFTER THE NAME OF A. SHEPTYTSKY , LVIV, UKRAINA

The Lviv National Museum is one of Ukraine’s largest museums, dedicated to Ukrainian culture in all its manifestations. It was established by Metropolitan Archbishop Andrey Sheptytsky in 1905 and was originally known as the Lwow Ecclesiastical Museum. It currently bears Sheptytsky’s name. The founder donated some 10,000 items to the museum and raised the funds required for it. After the World War II, the museum was renamed the Lviv Museum of Ukrainian Art. The collection was augmented by adding a number of exhibits confiscated from other Lviv museums. 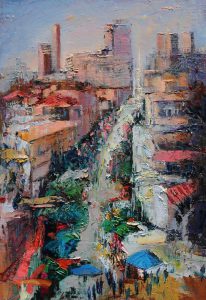 CENTRAL EXIBITION HALL OF THE ACADEMY OF ARTS OF UZBEKISTAN, TASHKENT, UZBE...