A.I. Kuindzhy Art Museum was opened on November 29, 2010, and is located in the historical part of the city, in the mansion, which was built in the early XX century.  In the Museum we can see the original objects of the late XIX-early XX centuries, works of A.I. Kuindzhy and his contemporaries from the funds of Mariupol local history museum, the photos, the letters of A.I. Kuindzhy, the copies of the artist’s paintings from the State Tretyakov Gallery and the State Russian Museum, and also the original works of A.I. Kuindzhy, I.K. Aivazovskyy, A.P. Bogolyubov, V.V. Vereshchagin, N.N. Dubovskyy, L.V. Lagorio, I.I. Shishkin is exhibited from the founds of Mariupol local history museum. 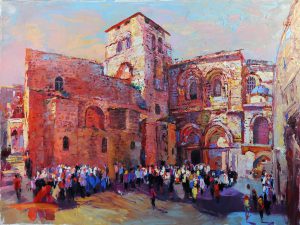 LVIV NATIONAL ART GALLERY AFTER THE NAME OF B. VOZNYTSKY, LVIV, UKRAINE
0